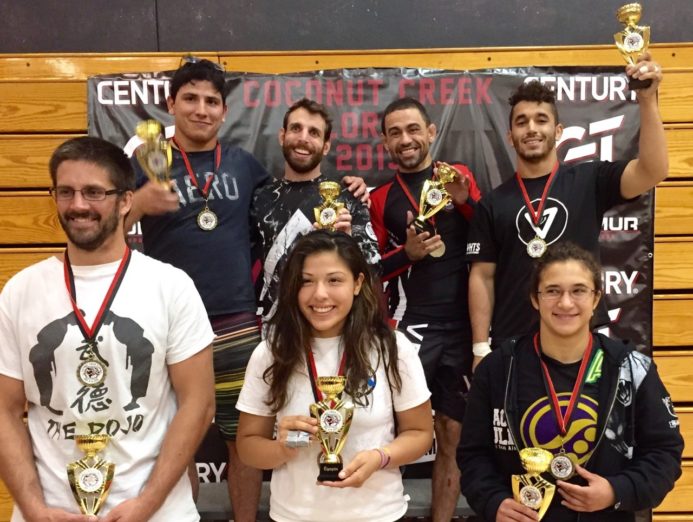 Abu Dhabi Combat Club has been in existence since 1998 and is considered the Olympics of Submission Grappling. Competitors representing 48 countries and covering five continents compete all over the world in hopes of making it to the ADCC World Championship, which takes place biannually.

ADCC World Championship is coming up this August 28, 29 and 30 in Sao Paulo, Brazil. The only ways to compete in this prestigious event are: winning the last event, securing a direct invitation from the committee, or by winning one of the trials been held around the World.

Our head instructor, Vagner Rocha just secured his spot by winning the 76.9kg division at the North American ADCC 2015 trials, last Saturday  in Coconut Creek, FL. He will travel to Sao Paulo, Brazil to compete at the 2015 ADCC World Championship.

Many students and coaches from the VRMA Team were there to watch and cheer for Vagner Rocha. Here are some questions answered by Vagner Rocha.

First off congratulations on your recent win at  ADCC North American Trials. How did your matches go at the trials?
Thank you, I had 5 matches total. First 2 matches I won by submission: rear naked choke & arm bar triangle. The other matches was by points, against talented competitors.

Was this your first time competing for an ADCC event?
No. In 2011, I won the North American Trials in New Jersey in this same division, winning my trip to Nottingham, England. On 2013, I was the runner up in the Trials in Columbus, OH. Getting a direct invitation from the committee later on the same year 2013.

You have two schools in South Florida, the Vagner Rocha Martial Arts in Pembroke Pines and  in Plantation. Being a full time instructor and running your own gyms, how were you able to prepare for this competition?
To me teaching is a great form of preparation as well. When I help my students correct their errors I see possibilities for new positions. When you love what you do, it is just a matter of manage your time and setting your priorities.

What is a typical training week like for you? Who are your training partners? Do you only train at your gym? Do you train at other places?
Training BJJ everyday is part of my job and life but somedays I train twice a day with Roberto “Cyborg” Abreu in Miami, where he hosts our original Pro-Training, with numerous amounts of talented people. From teaching to training, I also have incorporated strength and conditioning  to my activities helping me feel faster and stronger.

You are a current UFC Fighter, and your most recent fight happened last year. Will you be fighting again this year or will you mainly focus on competing at the upcoming ADCC?
I plan on taking this upcoming 3 months to prepare and focus on ADCC, but I won’t turn down any UFC Fight opportunities if they offer me.

Is there anyone you would like to thank for helping you to get this opportunity and win?
I want to thank everyone who hung around all day to watch me compete at the trials. Fighting at home, makes me that much better because of the energy of my friends, family and team. I have a couple other special thanks: to my love, my everything Fafa Rocha , to Roberto Abreu, my brother you know there is a million reasons why I am grateful to you. To Enrico Cocco, Manoel “the Puerto Rican sensation” and Mestre Ricardo Liborio for always showing me support, also all of FightSports and VRMA Family for the love shown to me. Thank you to everyone who helped me or congratulated me! São Paulo here I come!!!

Here are the results of all weight divisions.  Congratulations to all going to Brazil to compete at the 2015 ADCC!